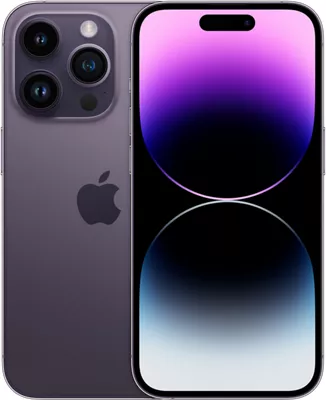 My iPhone 7 has worked well for me for many years now, but its camera (12 Mpx) has been somewhat of a disappointment in terms of image quality when used for digiscoping. So, this past week, the phone finally died and it was time to be replaced. The brand new iPhone 14 Pro appeared to be camera to get given its new 48 Mpx camera. I was intrigued to see how it would behave as a digiscoping camera and how it would compare with my current digiscoping rig (Sony a9 and Sony 40mm f/2.5) and my professional kit (Sony a1 and 600 mm f/4).

DPreview has nice overview of the iPhone 14 Pro camera system and provides all of the technical specifications necessary to compare with other phone cameras. Of special note is that the 48 Mpx resolution is only available when the camera is a 1X magnification. At all other magnifications the 3 camera system only produces a 12 Mpx image. This is a critical factor when digiscoping since the camera at 1X shows a considerably large vignette circle. So the next question raised, "how does cropping the 48 Mpx image compare to the 12 Mpx 2X images?". 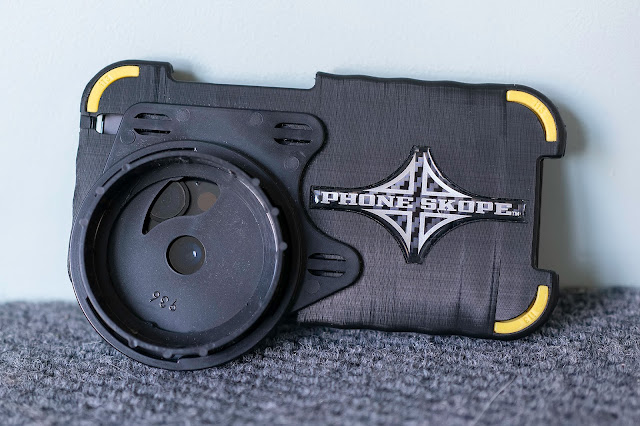 Note that the adapter, when snug against the eyepiece, generates a slight misalignment and corner shadowing. It is easily corrected by pulling the adapter out from the bottom a bit; this is important to obtain a uniform field-of-view and sharp vignette circle. 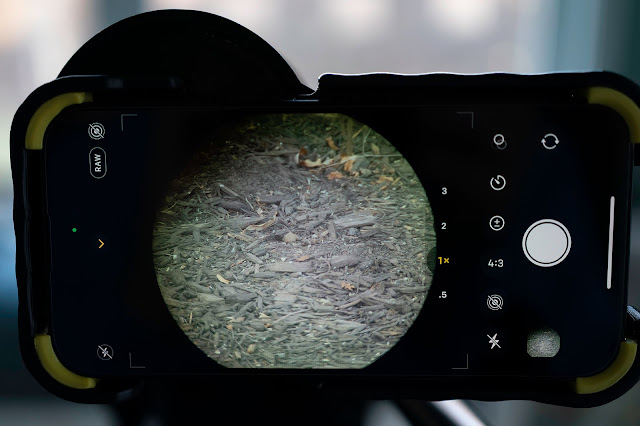 Properly fitted the PhoneSkope adapter fits snug even if the phone does not rest on the tripod handle. 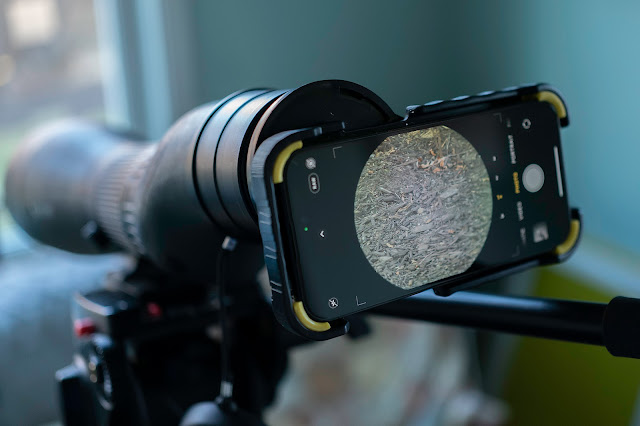 To get 48 Mpx resolution on the iPhone 14 Pro you first need to go into Settings, scroll down to Camera, then select Formats, then select Apple ProRAW and ProRAW Resolution=48 MP. Then, open the Camera, scroll to Photo, and select RAW as the file format before shooting, and make sure the camera magnification is set to 1X! All other magnifications will default to 12 Mpx resolution.
Below is the view through the scope at 1X, 2X and 3X magnification. Note the size of the vignette circle at 1X. It disappears completely at 2X and 3X magnifications. 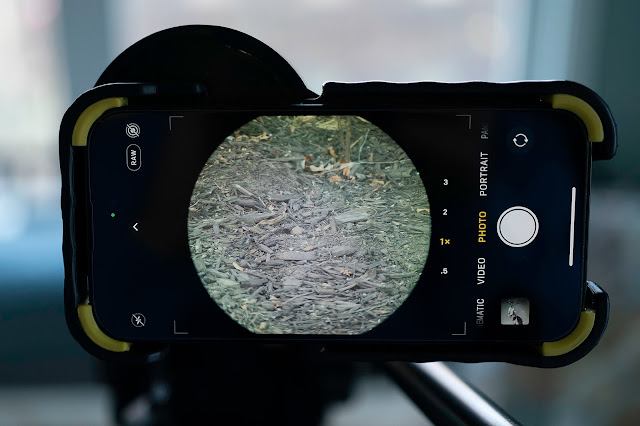 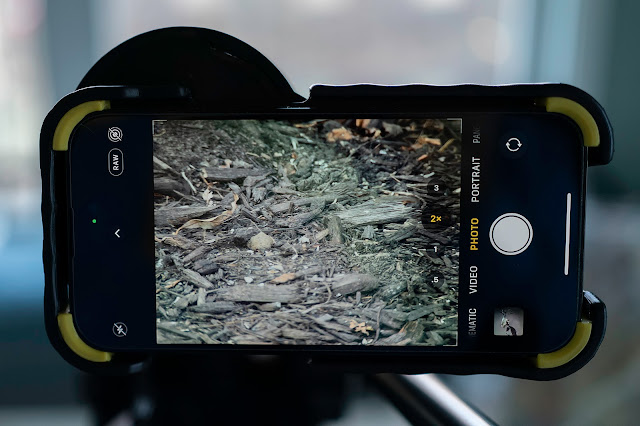 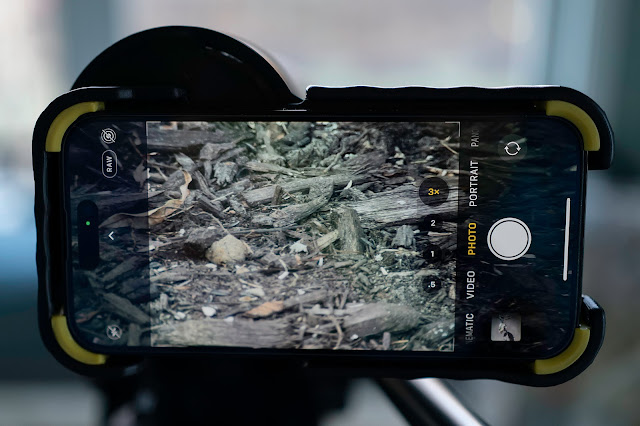 I took the rig into the field and focused on one of the bluebird boxes about 20' away. I took photographs with the iPhone 14 Pro at 1X (48 Mpx) and the scope eyepiece at it lowest magnification of 25X. Note that I had to rely on the camera to autofocus as I haven't figured out how to fix the camera focus and focus just w/ the scope. 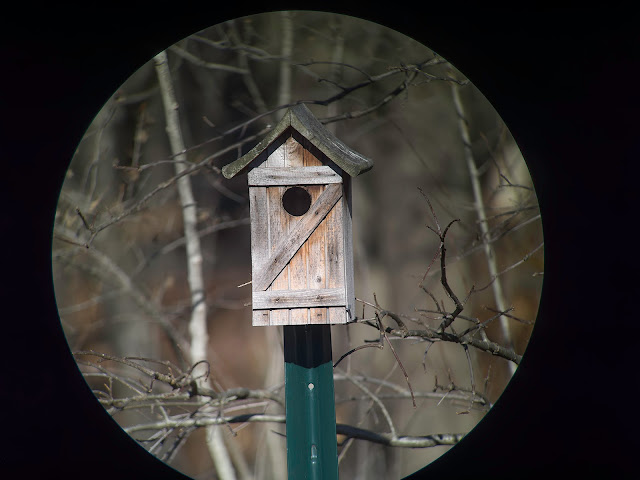 I then took images at 60X magnification to reduce the amount of vignetting while maintaining the resolution afforded by keeping the camera at 1X. 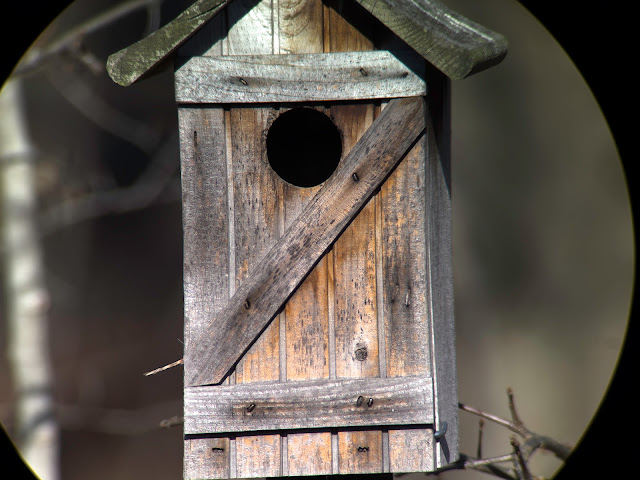 Even at 60X there is still a visible vignette circle at the edges of the 48 Mpx image. Disappointingly, the image at 60X is overall SOFT and not desirable. The same view captured with the scope at 25X and the camera at 2X magnification (12 Mpx) produced a much sharper image! 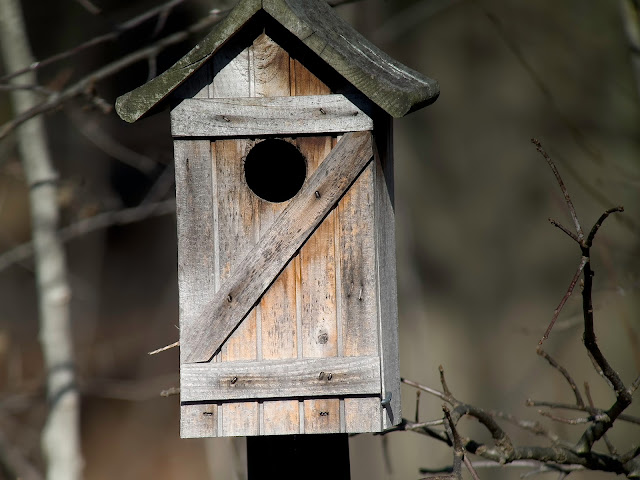 The good news is that you can crop the original 1X image to the same size as the 2X image and get similar resolution (12 Mpx to 12 Mpx). 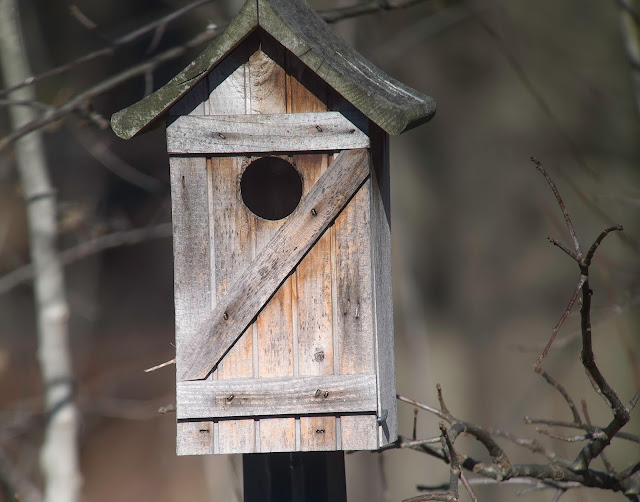 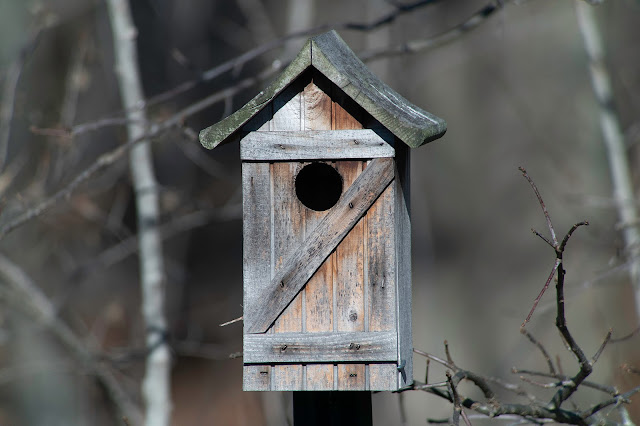 Image quality is slightly better w/ the Sony a9, which is expected since the Full-Frame 1" sensor on the a9 is much larger relative to the iPhone 14 Pro sensor. The a9 also provide a wider dynamic range with less fall-off at the corners (corner softness) but the iPhone 14 Pro produces an impressive image; both when cropped or just using 2X magnification at 12 Mpx. Note that I'm processing the iPhone 14 Pro images in the RAW format (*.dng).
This is what the image from the Sony a1 + 600/4 + 1.4TC (50 Mpx) looks like: 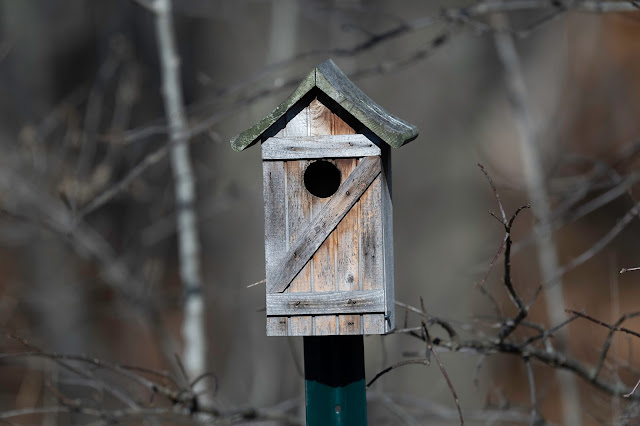 Again, image quality from the 1" Full-Frame sensor and 50 Mpx will always be technically improved over the iPhone camera phone, but as you can see, there is not much perceived difference in image quality between the iPhone 14 Pro and the mirrorless cameras. Another thumbs-up for the iPhone 14 Pro.
Image quality is definitely high when digiscoping subjects that are close. But, how does image quality fare when the subject is at a considerable distance and when contrast is such that chromatic aberration (CA) has to be taken into account? To test, I turned the scope on one of the power line towers that was about 150' away. The black on yellow numbers along the side of the tower would give me a chance to check for CA. Autofocus struggles just a bit through the scope and you'll find the camera jumping from different focus points, but the lock is long enough to get a few images captured.
Below is an image taken w/ the iPhone 14 Pro at 1X (48 Mpx) at 25X on the scope eyepiece: 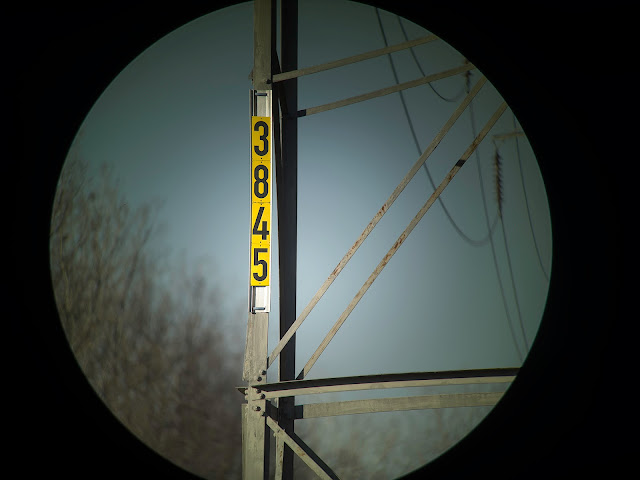 Auto-exposure from the camera is causing some shadowing along the edges of the image caused by the bright background. The good news is that the numbers appear sharp and without evidence of CA. Compare with the image captured at 60X on the eyepiece and 1X magnification on the iPhone 14 Pro: 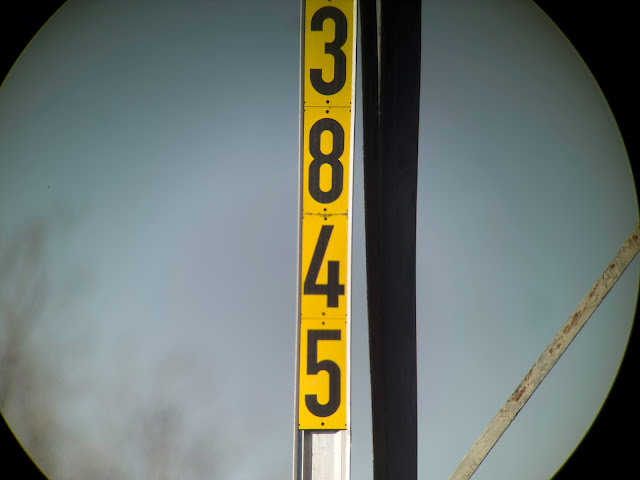 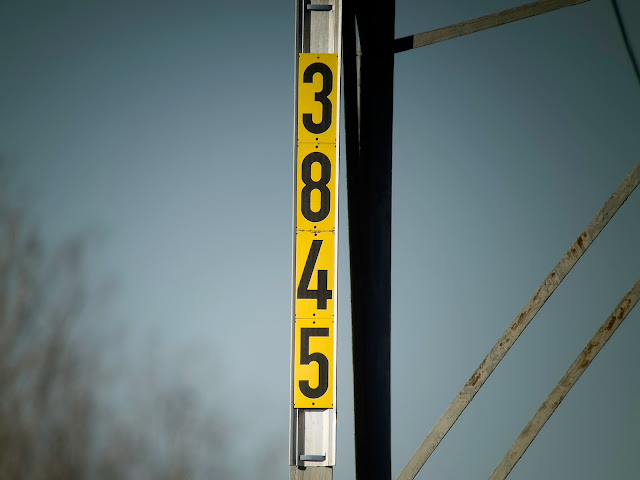 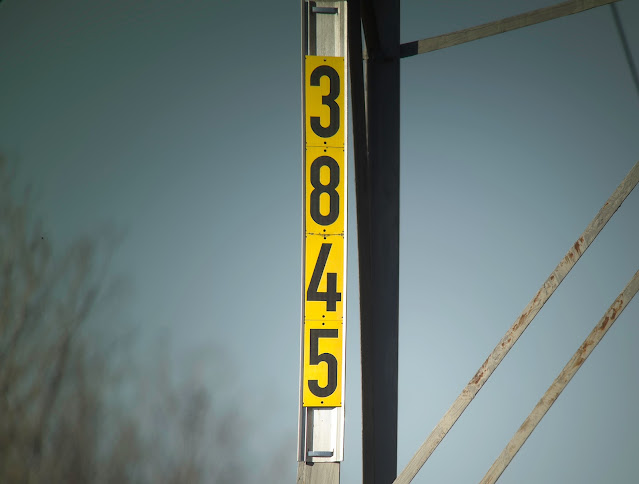 Though both images look nice I believe the top image is slightly sharper and probably due to improved focusing at 2X relative to the 1X focusing.
Here are photos of the same structure using the Sony a9 digiscoping rig (top) and the Sony a1 rig (bottom). 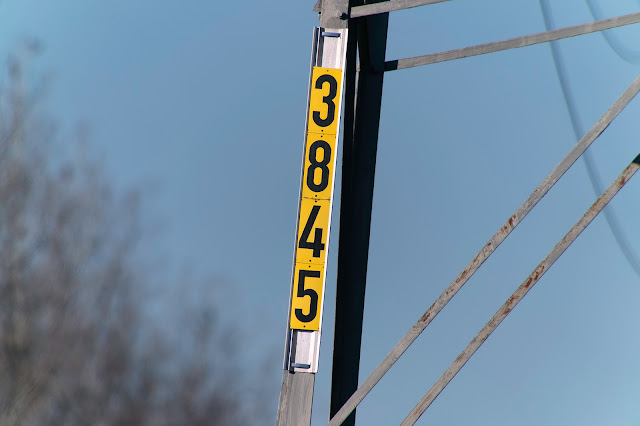 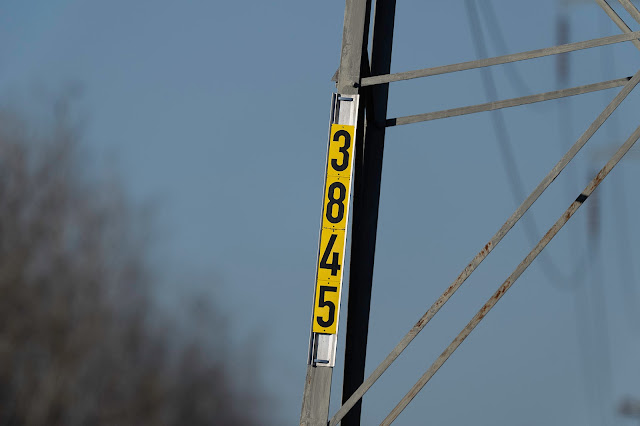 The full-frame sensors really do improve image quality, especially at longer distances. Still, I think that the iPhone 14 Pro took some impressive photos compared to its larger-sensored competition.
As with most digiscoping rigs image quality degrades exponentially with distance. So the advice to shoot as close as possible continues to be given.
I had an opportunity to test the video capabilities of the iPhone 14 Pro when a rare Little Gull made an appearance at the Detroit River Hawk Watch in nearby Brownstown, MI USA. The bird was swimming in the channel about 150-200' away. I had the scope at 25X and the camera at 3X magnification I was very pleased with the results.
In summary, the iPhone 14 Pro is another in a long line of great phone scoping cameras. With its 48 Mpx sensor the camera phone takes beautiful, high-resolution images that can be cropped substantially to provide records of those valuable moments we witness through our spotting scopes. Users need to be aware that 48 Mpx is only available when the camera is set to 1X, and all other magnifications will reduce resolution to 12 Mpx. Vignetting is an issue at 1X when the phone is mounted to the scope, but the resolution more than makes up for this. Zooming to 2X removes all vignetting, and even the 12 Mpx resolution produces wonderful images. 4K/30p video is an added bonus. Autofocus is very good though it might get a bit frustrating if you try to perform critical focusing with the scope; the camera jumps around, especially at longer distances. But, the iPhone 14 Pro will produce wonderful images and is highly recommended as a digiscoping camera for those who don't want to carry larger, heavier digiscoping cameras and adapters.